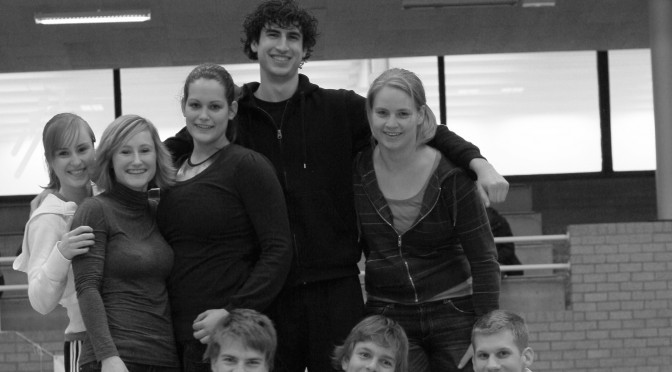 In the twelfth year of the existence of D.S.T. Pegasus, board 12 is the head of the association (board 12 isn't strictly the twelfth board, read about this in the board section). The association keeps growing with almost 150 members this year! The location of the trainings has been the centre of sports and culture of the TU Delft, named X. The training facilities have improved loads when we moved from the old location at the Fretstraat to X, but we do have to miss the Drunk Horse. Luckily, after a succesful pilot with other associations we have monthly drinks at the Cultuurlab.
Peggy has been missing for a while now, so we found a fellow mascot Penus. To everybodies surprise, we received a beautiful present at the introduction weekend: another mascot, Pagina. She keeps penus' company at competitions and other activities.
Since we moved to X we have a whopping five trainings per week, three nights in the week. The trainings are given by three head trainers and supported by the student trainers. Next to these trainings in Delft, the external trainings in Zwijndrecht are popular among our members as well.
Besides the trainings, there are many activities organised by our numerous comittees! There are many activities that have become a yearly staple, like the Pegaweekend, the surf vacation and the barbecue. Because these activities, Pegasus is much more than just a gymnastics association! Pegasus brings all gymnasts, young and a bit older, beginner and advanced, Dutch or international, together. Together these members elevate Pegasus to great heights!

Written ni 2019 by Thijme Lee
Commissioner of Board 12 of D.S.T. Pegasus

The Delft Student Association Pegasus has begun its 7th life year! Last board year (2013/2014) the five year existence of Pegasus has been abundantly celebrated with a week full of anniversary activities. This season, Pegasus has reached the magical 100 members, which was celebrated during the birthday of Pegasus and our mascot Peggy. We are still the biggest student gymnastics association in the Netherlands, something we're proud of!

A large portion of our members is active within the association. There are many activities next to gymnastics. There are 7 committees and counting, old board members still come to do gymnastics, and in cooperation with Euroturn there are external trainings, which are very popular, despite us having three normal training nights.

Written in 2014 by Jouke van der Velden
Chairman of the 7th Board of D.S.T. Pegasus

Despite the fact that Pegasus is only two and a half years old, and that there is not yet much to say about its history, I think it's interesting and important to know how the association came to be and what we have achieved in its still short life.

It is likely that for decades there have been students in Delft would like to do gymnastics, at low or high level. Many students chose to stay with their old gymnastics associations, seek out a non-student association or even stop and try a new sport.

Only in 2008 did the demand for a student gymnastics association become big enough to start one, on the initiative of Denise Stoeller. After extensive consultation with the right organizations it turned out to be possible, and the gathering of the first gymnasts and the preparations of the actual founding of the association could start.

On 30 June 2008 in the Ruif the first meeting with 8 students, of whom the first board had already formed, was a success. The most important talking points were the OWEE and of course the name of the association. The current name wasn't devised yet, but 'Uitgerekt', 'eTUrnity' and 'The A-turn' where considered seriously!

Only after the first meeting was the name Pegasus devised. Pegasus is in one word an analogy for everything a Delft gymnast should stand for. Powerful and strong, but still elegant. Flying through the air, yet landing and standing firmly on the ground. Shining like a star in the sky and of course the mythological image.

At the 2008 OWEE the moment for Delft to meet the new gymnastics association was finally there. With the airtumbling being popular with both gymnasts and non-gymnasts, the tone for the first official year of Pegasus was set!

Next to the organizing of the OWEE, the starting of the first trainings and making sure the finances add up, the official papers had to be arranged. The first board made an appointment with the notary and on 8 October 2008 the Delft Student Gymnastics Association Pegasus was officially founded.

Written in 2011 by Witek Nawara
Commissioner of activities of the 1st board of D.S.T. Pegasus and co-founder of the association